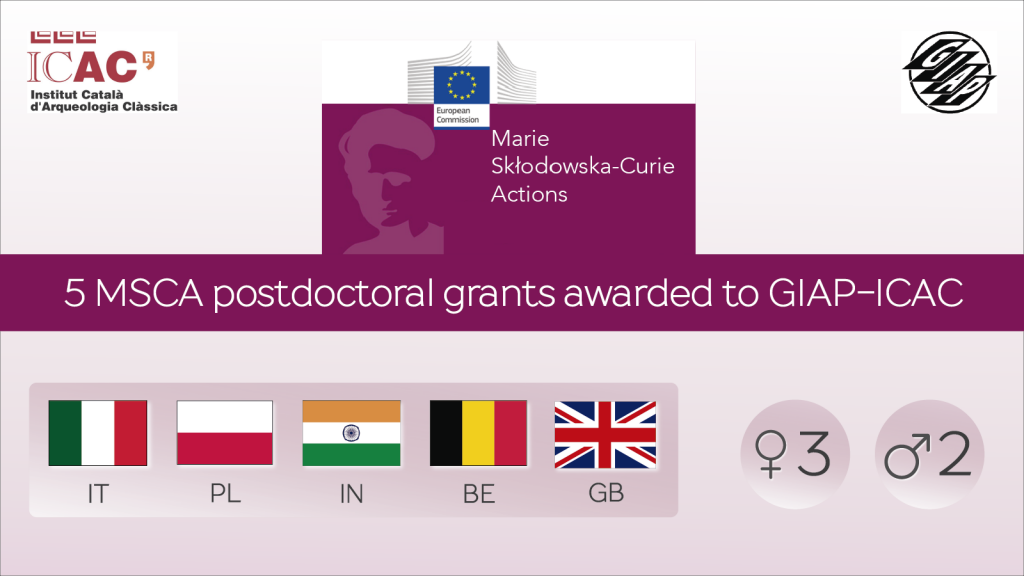 Today we’re celebrating the remarkable success of our MSCAs applications for the 2021 call, the results of which have just been announced. GIAP-ICAC is proud to welcome 5 new MSCA postdoctoral fellows (and possibly one more waiting in the reserve list), expanding research in the forthcoming years and providing research funds for a total value of almost 900.000 euros in the following areas:

Besides the obvious research-opportunities these present – especially for our archaeobotany, remote-sensing and computational teams – they also enrich our already-international team with new researchers from across Europe and beyond.

Learn more about the projects below. We will keep you updated when the projects start and with their progress. Stay tuned!

Intelligent Archaeological Mapping of Long-Term Settlement in Punjab (IArchMap) will develop a new workflow for archaeological regional surveys through the application of machine learning methods to historical maps, multitemporal multisource satellite data and drone-acquired high-resolution imagery. These will be tested and complemented by field ground-truthing and analysis of field material. This new methodological approach will allow archaeologists to map and characterise information on past human settlement over large areas with an unprecedent speed and accuracy.

IArchMap will complement site detection methods with data on landscape change that might have impacted human settlement and the formation and preservation of the archaeological record.
IArchMap design is based on a combination of experimental approaches currently in development by the supervisors and the host research group. The Action’s training will provide the researcher with the skills required to implement those approaches in a single workflow for the first time. The researcher’s previous experience and expertise will provide ground-truthing data and an interpretative background to evaluate the project’s data contribution to current historical debates.

The selected regional case-study, the territory of the modern Punjab State (India) has been intensively settled since prehistory, but it has been significantly less explored than neighbouring regions. The project’s results will represent a significant step forward in the knowledge of historical settlement dynamics of the study area and the Indus Region in general and will benefit its Cultural Heritage management and preservation. Methods and data employed for IArchMap will be freely accessible, openning up the possibility for their application to other regions of South Asia and beyond.

The emergence of the Roman Empire marked a series of significant political and socio-economic changes across modern-day Italy as well as across a very large part of modern-day Europe. Among these, the establishment of a new transport network and the development of trade and commerce that this facilitated, was one of the most important and lasting changes.

NetFoodIt aims at using imported food plants, for the study of Roman transport and movement and the socioeconomic dynamics that this established within the core of the Roman Empire and its broader surroundings, that is, across modern-day Italy. In doing so NetFoodIt will shed new light into the relation between mobility, commerce and the introduction of new tastes in Roman Italy. NetFoodIt will develop a geodatabase of Roman food imports assemblages and study their social access and rarity/regularity. In combination with the Roman transport network the project will next investigate the centrality of the sites with presence of imports, their character as consumption or redistribution centres and will reconstruct the routes for the distribution of these food plants.

This will provide important insights into Roman commerce, economy and the extension and acquisition of new tastes as Rome expanded and developed contacts with other ancient cultures. In order to do so, a combination of novel techniques, which include Social Network Analysis, Site Rarity Index calculations, Spatial Network Analysis and spatial statistics will be employed in conjunction for the first time for Roman Italy. These methods and the training provided during their implementation by a team of leading international researchers will enhance the candidate’s profile with cutting-edge techniques that will situate her at the forefront of research in her field.

PlantNetGem: Exploring the process of urbanisation in the Roman provinces of Germania through the study of food plant commerce

The arrival of the Romans in large parts of current Europe had a major impact on society, with the creation of a new transport network and the development of cities being two of the most significant and lasting changes. However, so far, little work has been done to quantify and understand the connection between cities, how the netwrok developed and its lasting consequences.

Through the study of imported/introduced food plants into the provinces of Germania in the Roman period, PlantNetGem aims to contribute to a better understanding of foodways and the role of transport and commerce in the development of the population nuclei in this area. It will apply a novel, interdisciplinary approach, combining archaeobotany, computational archaeology and data science through practical training by the supervisory team that pioneered part of the proposed methodology. The project will start by creating a geodatabase where archaeobotanical and archaeological information from the study area will be stored.

These will provide the analytical basis to identify which food plants arrived and when, who had access to these and the reasons why. Network science will be applied to reconstruct settlement connectivity in relation to a) their access to the introduced food plants, and b) their position within and access to the Roman transport network. Agent-Based Modelling and statistical analyses will be applied to further allow testing hypotheses concerning settlement position and hierarchy in relation to commerce to ultimately evaluate the role of the ancient transport network in the distribution and importance of urban centres and analyse to which degree these patterns have endured in time up to the modern period.

PlantNetGem builds upon the candidate’s solid expertise and involves training on big data management, network analysis, agent based modelling and associated geostatistical analysis to equip her with innovative skills that will add a new dimension to her analytical potential.

SIGNATURE aims to investigate the long-term settlement and land-use dynamics that shaped the cultural soilscapes of the Levant, with a particular emphasis on revealing new archaeological sites that have been obscured by recent agricultural encroachment and abrupt land disturbances. The study area encompasses the endangered archaeological landscapes of the Bekaa Valley in Lebanon and its adjacent fertile plains between the Litani and Orontes rivers. As an aftermath of the Lebanese Civil War and the long-lasting conflict spillovers that followed, the traditional agronomic landscapes of the Bekaa were severely transformed by agricultural autarky. The scarce initiatives that are set in place to map vulnerable heritage primarily focus on well-known, monumental sites such as the UNESCO complex of Baalbek. Other fragile and less visible archaeological and landscape features, such as eroded earthen mounds or tells, are largely under-represented.

SIGNATURE combines Big Earth Observation Data and geoarchaeological signatures in computational workflows to 1) accurately map and predict the location of  anthropogenic soils and landforms, 2) monitor historical and present-day land use trends, and 3) identify acute landscape transformations affecting the preservation of vulnerable archaeological and heritage assets. A key aspect of the project methodology is the integration of multi-source and multi-temporal satellite data in artificial intelligence procedures, coupled with ground and high-resolution soil proxies in advanced geostatistical workflows. SIGNATURE will produce and share a set of comparable data and reproducible tools for the study and management of endangered cultural landscapes, likely to be adapted and implemented by scholars and Cultural Heritage practitioners working in conflict and post-conflict regions.

For many decades ancient water management research in archaeology was mainly focused on the Near East and surrounding regions with similar hydroclimatic conditions. The political situation in that region and, as a consequence, the lack of new data nearly stopped further scientific activities. The relevance of this research topic, however, did not decrease and many methods for the study of ancient irrigation and water management using remote sensing were developed during the last years. However, most of the previous approaches are region-focused (lacking applicability to other environments) and have mostly detected isolated channels, complicating the study and understanding of the network that constituted ancient irrigation systems.

UnderTheSands will employ a combination of novel remote sensing techniques (including Multi-Scale Relief Model, Seasonal Multitemporal Vegetation Indices, hybrid machine-deep learning algorithms, archaeomorphology, spatial correlation indices, and historical analyses) and sources (including multispectral imaging, synthetic aperture radar, and TanDEM-X) to produce a workflow for the detection and analysis of ancient irrigation networks in diverse environments. These methods and the training provided during their implementation by a team of leading international researchers will enhance the candidate’s profile with cutting-edge techniques that will situate him at the forefront of research in ancient irrigation studies.