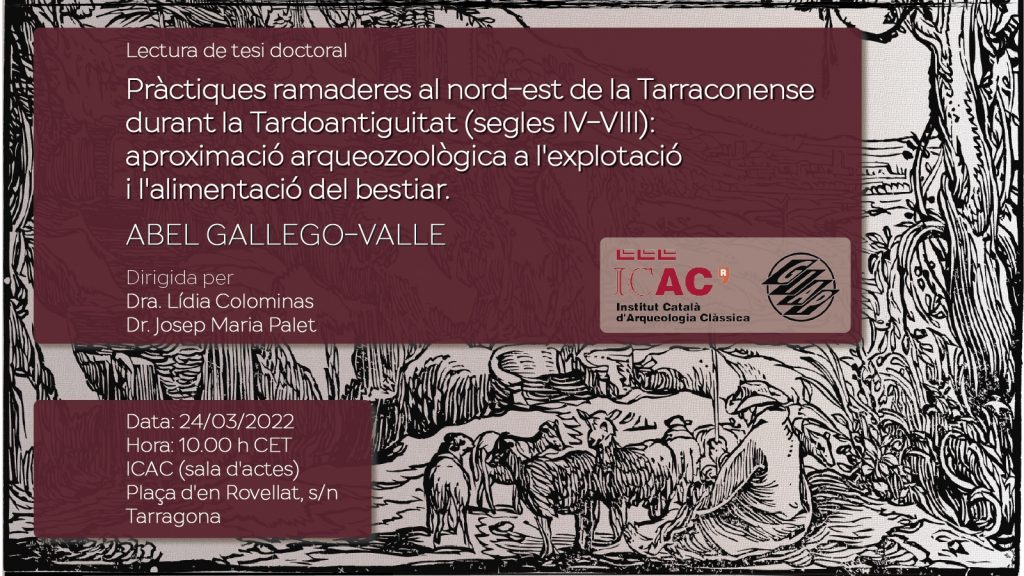 As part of the interuniversity doctoral program in Classical Archeology (URV-ICAC-UAB), we are pleased to invite you to the public reading of the doctoral thesis of GIAP predoctoral researcher Abel Gallego, which has been co-directed by Dr. Lídia Colominas, Ramón i Cajal researcher at the Catalan Institute of Classical Archeology (ICAC), and Dr. Josep Maria Palet, director of the ICAC and co-director of the GIAP group:

“Animal husbandry in the north-east of Tarraconensis during Late Antiquity (IV-VIII centuries CE): an archaeozoological approach to the exploitation and feeding management of the herd”

The defence ceremony will be held in the ICAC Auditorium on Thursday, March 24, from 10 a.m. CET. The event can be followed live by Teams. The defence will be presented in Catalan.

The aim of this PhD dissertation – entitled “Animal husbandry in the north-east of Tarraconensis during Late Antiquity (IV-VIII centuries CE): an archaeozoological approach to the exploitation and feeding management of the herd” – is to contribute to a better understanding of the animal husbandry systems that were put into practice during the Late Antiquity period (4th – 8th c. CE) in the North-East of the ancient province of Tarraconensis.

During this period, the region under study witnessed major changes between the collapse and fall of the Roman Imperial administration and the arrival of Visigoths. These German people were forced to move from their original region due to different migration patterns that occurred in Europe and Eurasian Steppes at the beginning of the Late Roman Empire period. The arrival of the Visigoths to the Iberian Peninsula, mostly from the beginning of 6th c. CE contributed to the changes in the political, social, and economic organization of the Roman Hispania provinces, transformations that were already under development from the beginning of the Late Roman period.

The archaeozoological analysis carried out on Late Antiquity faunal remains from six archaeological sites from Tarraconensis– and their subsequent comparison with the few available previous case studies completed – sheds some light onto livestock practices during this historical period, a field of study where today there is still some obscurity.

Furthermore, with the application of the dental microwear analysis on ovicaprine molar remains from the analysed faunal assemblages – and the creation of the first dental microwear reference collection for domestic sheep, designed for and carried out with the objective of studying the feeding management systems exercised by past agropastoral societies – it can be proposed possible strategies used to feed the ovicaprine herds, taking into account current paleoenvironmental data.

The present research reveals the practice of livestock strategies principally pointed towards the exploitation of ovicaprine herds above swine and bovines, a trend which is increased with the end of the villae model from the Roman tradition. In addition, the dental microwear data uncovered the generalised use of stored fodder for the diet of sheep and goats.