Redrawing the interaction between prehistoric societies and volcanos, climate and palaeoenvironments in central France 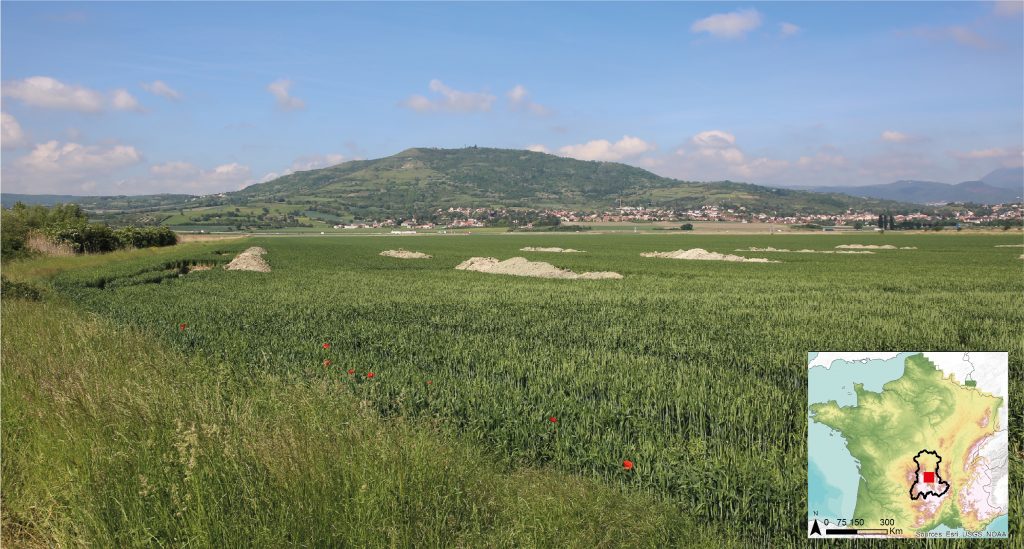 A new study in the Sarliève marsh, recently published in Quaternary Science Reviews, redraws the interaction between volcanos, climate, paleoenvironments and prehistoric societies during the Holocene in the Limagne plain (central France).

The Sarliève marsh is an ancient lake, nowadays drained, in the Limagne, the largest intra-mountanous plain in the Massif Central, near Clermont-Ferrand. Although there are many lakes and peat bogs in the Massif Central highlands, the Sarliève marsh is the only lacustrine sedimentary archive which can be used to reconstruct past environments in the lowlands of the Limagne plain (and is therefore crucial for any research about past socio-environmental interactions).

The area is very well known for its very abundant and multi-period archaeological occupations from the Neolithic to the Roman Period, including the mighty and renowned gallic oppidum of Gergovie. Many studies have tried to retrieve, date and analyze sediments from the marsh since 1960’s, however all failed in the crucial point: dating accurately the sedimentary sequence. This problem has been hampering the research for decades, and in practical terms limiting the use of all the available palaeoenvironmental data in the area. In order to bypass this challenge, we re-dated the sedimentary sequence and reviewed and reinterpreted the palaeoenvironmental history of the Sarliève marsh, as well as some crucial aspects of socio-environmental interaction in the catchment.

First, we drilled several sedimentary cores in the hearth of the marsh, carefully dating them by radiocarbon and constructing an age-depth model for the sedimentary sequence. This model is much more accurate and reliable that all the previous ones, which were significantly deviant and aged (and therefore unusable). We avoided the ‘reservoir effect’ that hindered accuracy by using reliable materials like wood or charcoal, and increased precision using a Bayesian model. Then, we performed high-resolution, multi-proxy sedimentological analysis (including grain-size analysis, magnetic susceptibility measurements, Loss on Ignition), geochemical and micromorphological analysis on the samples.

The results redefined the interaction between volcanos, climate, paleoenvironments and prehistoric societies during the Holocene:

The results of this study, especially its chronological model, will be the cornerstone for all the forthcoming research about socio-environmental interaction in the area.