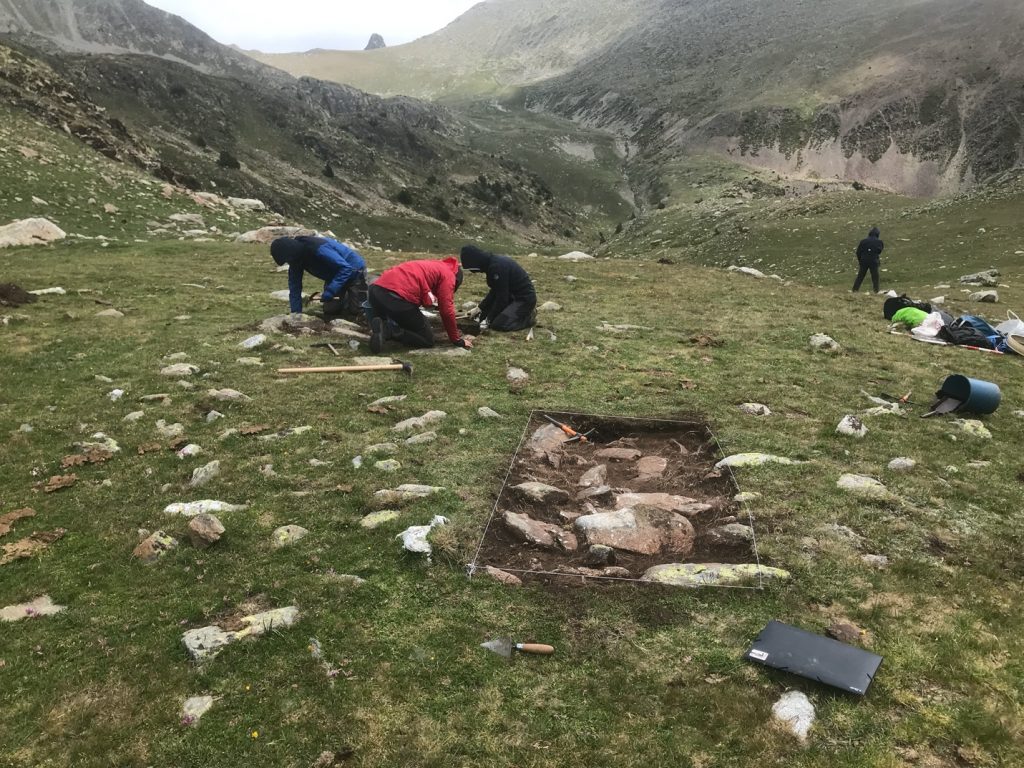 Archaeological team working in the area of Aparellats (Meranges), where we were able to document a possible phase of occupation related to a circular structure (2500 meters above sea level). Photo: Arnau Carbonell-Puigventós).

Since 2018, the archaeological works in the eastern Pyrenees have been centered in the Meranges area (Catalonia), in order to complete the archaeological map of the whole sector. To achieve this, we have been studying the area of ​​the Puigpedrós massif and the headwaters of the Duran River working in a multi-scale environment, from photointerpretation to fieldwork, helping us to understand the socio-environmental interactions in these cultural landscapes.

During this year’s campaign, we conducted a paleoenvironmental study through an altitude transcript with 6 test pits (between 2200 and 2750 meters above sea level). The archaeological work has been focused on three different sites: Pleta dels Moltons, Pla de Sallent, and the circular structure of Aparellats (Meranges, Catalonia). With a total of 9 test pits, it has been possible to recover archaeological remains that, together with the coal collected, will make it possible to delimit the chronology and the occupation phases of the studied structures. We are currently traversing through two valleys within the survey work, which are the Vall de la Llosa and Vallcivera.

The survey will be used to obtain an archaeological map of the whole sector, which associated with the areas previously studied by the GIAP (Vall de Núria-Coma de Vaca, Serra del Cadí, and Perafita-Madriu-Claror valleys (Andorra), will allow the archaeological characterisation of the high mountain area of the axial Pyrenees, its occupation and exploitation from a diachronic perspective, in order to be able to approach the economic and social understanding that these spaces had throughout time. These data will be used to plan future work, specifying areas of archaeological interest or as heritage assessors of these mountain areas.