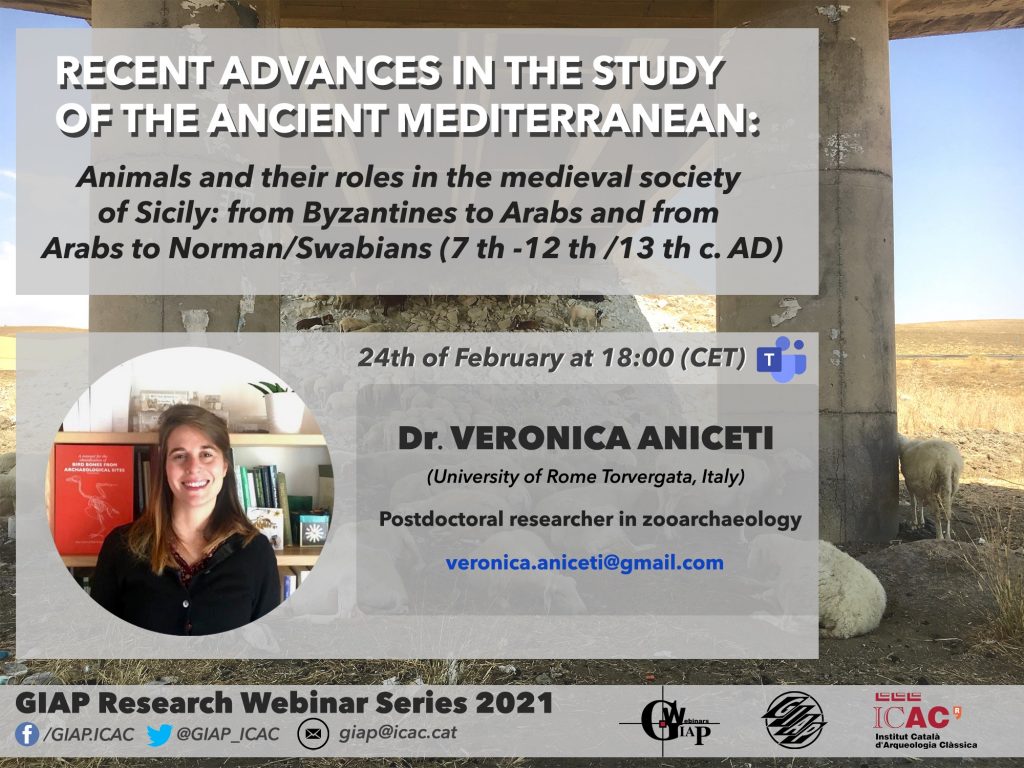 GIAP’s new webinar series ‘Recent Advances in the Study of the Ancient Mediterranean’ is hosting Dr Veronica Aniceti on the 24th of February at 18:00 (CET). Dr Aniceti will be talking about ‘Animals and their roles in the medieval society of Sicily‘.

You can join the talk here:

Here is a taster of what the talk will be about:

This talk will highlight how zooarchaeology can contribute to our understanding of the medieval history of Sicily and how this can also help in gaining a better insight into the broader mechanisms of cultural exchange, transmission and replacement, as well as the co-existence of different ethnic identities. In particular, the results of a number of faunal samples recovered from different site-types and dated to the medieval period in Sicily are compared and discussed revealing significant changes in the use of the main domesticates in the Byzantine-Arab and in the Arab-Norman/Swabian transitional periods. In the Arab period, the socio-cultural effects of the Islamisation of the island are attested by an overall dearth of pigs at most urban sites. By contrast, similarly to the Byzantine period, pigs continue to be represented at contemporary rural settlements, thus suggesting a higher resilience of rural communities toward the newly imposed socio-cultural and religious rules. Sheep become larger in Arab times; this was likely driven by an interest to maximise outputs from caprine husbandry, and can be seen as part of the ‘Arab Green Revolution’. During the Norman/Swabian rule, changes in dietary practices in comparison with the previous period are noticed. Although caprines maintain an important economic role, pigs are again present at urban and military sites; this might be an indicator of an ongoing ‘de-Islamisation’ of the island. At the same time, a further improvement of sheep size indicates a continuity in the Norman/Swabian period of animal husbandry strategies initiated by the Arabs.

Have a pick of the next speakers that form part of our first webinar series, celebrating leading research across the Mediterranean: