Religious experience at the temple of Epikourean Apollo in Bassae: Virtual Reality technology in the service of archaeoastronomical research 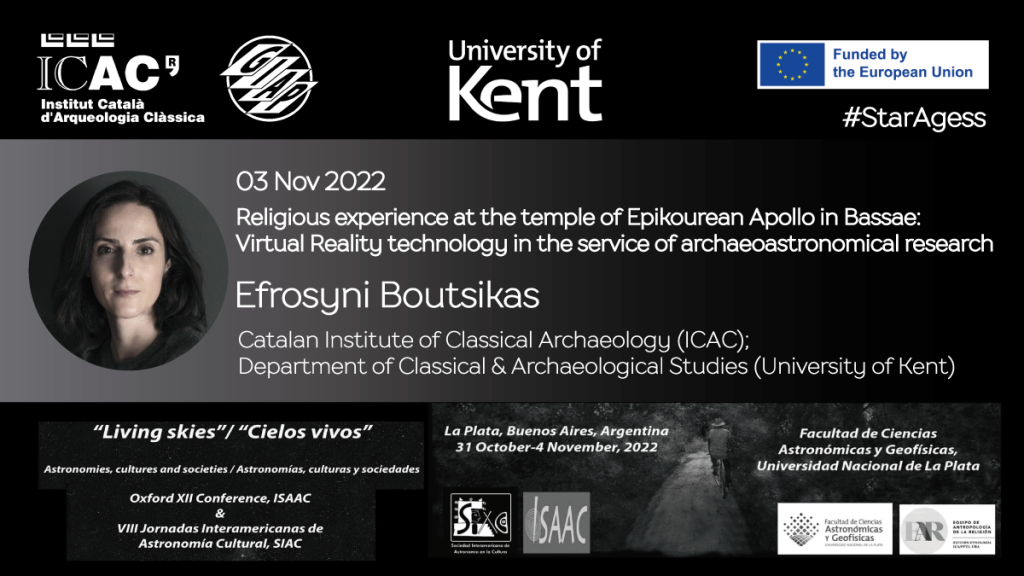 GIAP (ICAC)’s researcher Efrosyni Boutsikas is travelling to Argentina to present in the Oxford XII Conference (ISAAC) and VIII Inter-American Conference on Cultural Astronomy: “Living Skies”, organised by the International Society of Archaeoastronomy and Astronomy (ISAAC) and the Inter-American Society of Astronomy in Culture (SIAC), which takes place in Buenos Aires from October 31st to November 4th 2022.

Religious experience at the temple of Epikourean Apollo in Bassae: Virtual Reality technology in the service of archaeoastronomical research.

Reconstructions of ancient religious performances at a specific time and place facilitate better understanding of ways in which natural light, or the night-sky may have been used to enhance religious experience. If combined with the study of spatial movement, such approaches allow us to infer on emotionality and cognitive experience (e.g. Bille and Sørensen 2007, Sundstedt et al 2004). Architecture was imbedded in ancient ritual experience. Orientations, lines of sight, spatial movement –in other words, methods based on a space syntax– become particularly important in enriching interpretations on perception.

The fifth century BCE temple of Apollo at Bassae, located on a peak of the sacred Arcadian mountains, has long been suspected to have been constructed with astronomical considerations in mind. Such an aim seems fitting for Apollo who was viewed as the god of light and calendars. If indeed present, these would have greatly influenced religious experience. The temple’s current state of preservation is missing key architectural elements and the material used for the temple’s foundations has caused considerable movement of the structure above ground level. Furthermore, since 1980, when the temple was completely covered with a canopy to be protected from the elements and rapid deterioration, it has not been possible to either make direct archaeoastronomical observations or to study the temple within its landscape. Through a Virtual Reality Model of the temple and its surrounding landscape, this paper presents reconstructions of specific moments in the year thought to have been of importance. For the first time since its construction, we are able to appreciate and track the sun’s path inside the temple and to determine whether the suspicions of deliberate solar observations, expressed more than forty years ago, can be verified (Cooper 1968).

The aim of this paper is to better discern the conditions which shaped ancient experience of the temple, so that they, in turn, may help us identify ways in which darkness, and illumination may have assisted in intensifying religious experience. A great deal is revealed about the way the sun entered the temple’s interior, which leads also to a discussion on the contribution of digital technology in understanding ancient experience and ancient natural light manipulation in enhancing experience of religious architecture.

This project has received funding from the European Union’s Horizon 2020 research and innovation programme under the Marie Skłodowska-Curie grant agreement No 101026674 (STAR-AGESS; H2020-MSCA-IF-2020).