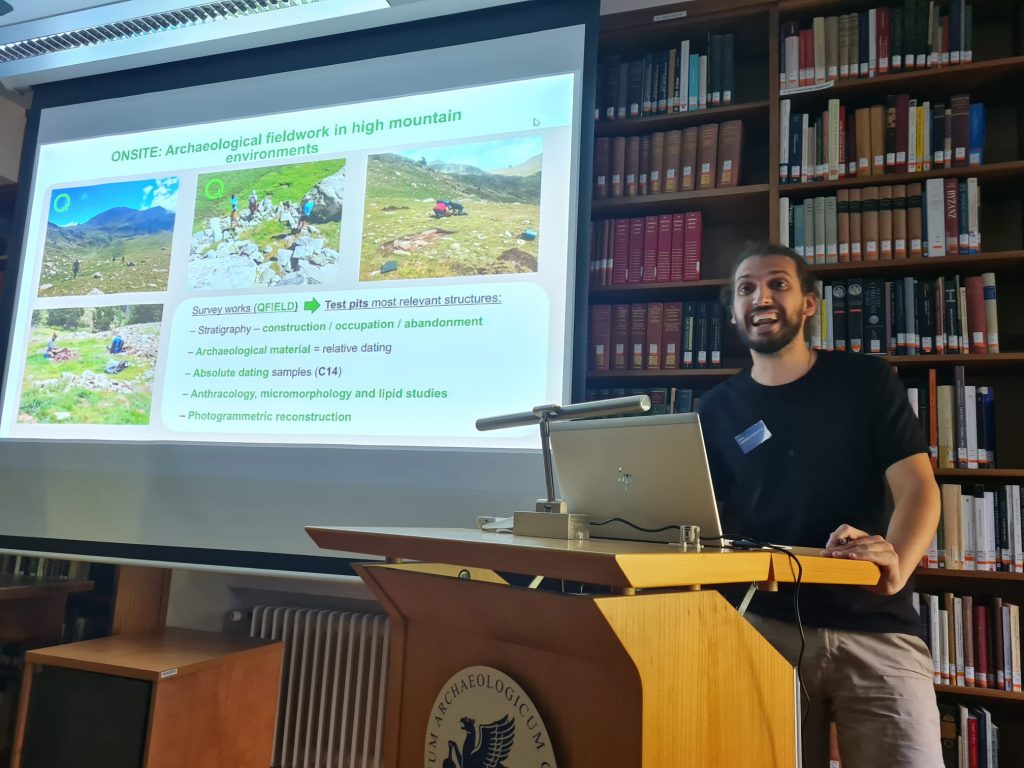 The workshop was a series of presentations on topics related to climate change, palaeoenvironment and archaeology, where the discussion between mentors and PhD was encouraged. They also had spaces to present parts or the general state of the PhD’s theses, to open discussion and provide advice, feedback and support.

Arnau’s presentation included not only his PhD thesis, which is funded by an FPU grant by the Ministry of Universities of Spain, but he also presented some of the latest results of our mountain team’s palaeoenvironmental analyses in Molleres II (see below):

The marginality with which historiography traditionally perceived mountain areas has changed in recent decades, thanks to the increase in research on the main European mountain systems. The Alps, the Pyrenees, and the Cantabrian Mountains are the subject of new projects, most of which are proposed from Landscape Archeology perspective, with multidisciplinary and diachronic approaches. In general, the results obtained show that the human impact on these spaces has been intense and that they constitute authentic cultural landscapes, modeled over time. In this context, since 2004, the ICAC Landscape Archeology Research Group (GIAP) has carried out various research projects in high mountain areas of the eastern Pyrenees. Between 2004 and 2009, the research focused on the Madriu-Perafita-Claror valleys (Andorra) and the Cadí mountain range, in the upper Segre. Since 2010 and within the framework of various projects of the Plan Nacional, the valleys of the upper Ter (valleys of Nuria, Coma de Vaca, and Coma del Freser) in Ripollès have been studied. Since 2018, and within the framework of the present doctoral thesis inscribed, the research has focused on the valleys of the axial Pyrenees of Cerdanya, west of Puigcerdà. The results in the diverse areas of the study shown the importance of pastoral activities in the process of the anthropization of high mountain spaces since the Neolithic, and allow a history of human activities developed in these valleys over time.

The main objective of the doctoral thesis is the characterization of the occupation and exploitation, especially livestock, of these high mountain spaces, from a diachronic perspective, and in turn their integration and interaction with the plain spaces, especially in Cerdanya and the high Segre River, from an interdisciplinary perspective of Landscape Archaeology. The results should allow us to better understand the origin of transhumance in this sector of the Pyrenees, as well as the territorial implantation of Iulia Líbica (Llivia) in relation to the control and exploitation of the surrounding high mountain spaces from the moment that this nucleus becomes a Roman township, a key element for understanding the occupation and exploitation of the mountains that delimit this Pyrenean valley, and the interactions between the plains and the mountains in the territory of the Roman city. The combination of the data already acquired, together with archaeomorphological, archaeological, documentary, and paleoenvironmental analyses, will be the main means to understand the cultural and economic links, with a particular interest in the study of the socio-environmental interactions of these spaces, and thus design models that are capable of integrating the configuration and dynamics of cultural landscapes.