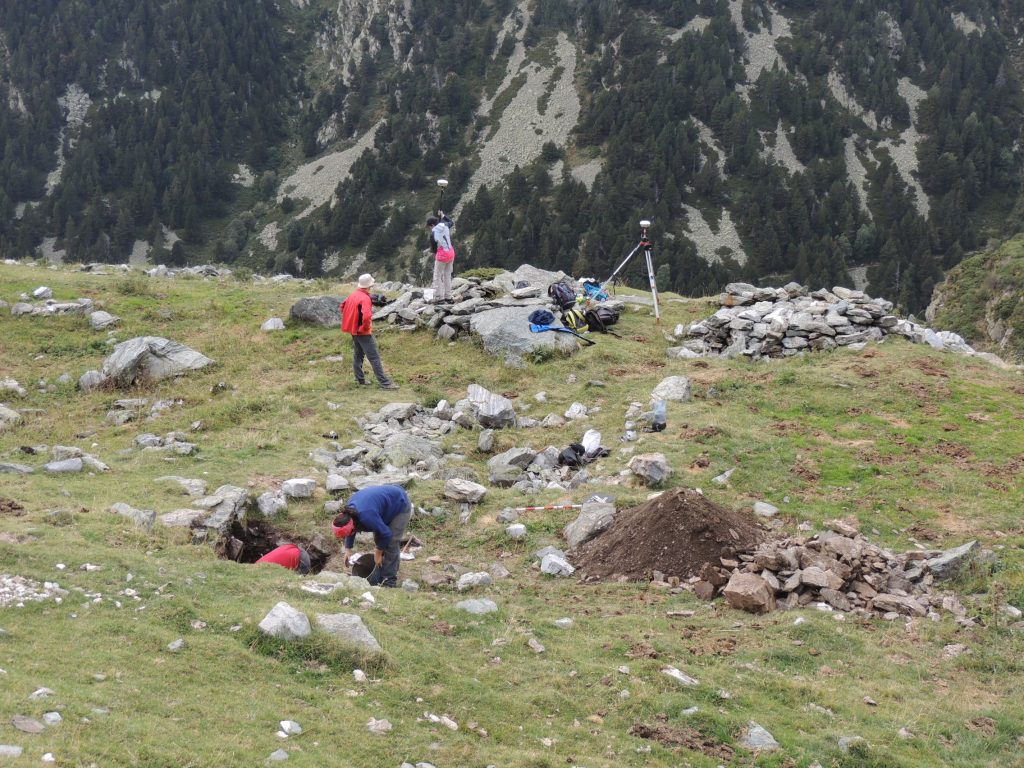 The 2022 FECYT call for knowledge transfer projects has awarded a grant to a proposal by GIAP (ICAC), to boost the high mountain cultural landscape in the Núria Valley (Eastern Pyrenees).

The project ‘ArqueoPirenaia. Social transfer, didactics and mediation of heritage in a high mountain cultural landscape (Núria Valley, Eastern Pyrenees)’ is a pioneering project in the inclusive mediation of cultural heritage. This project, funded by FECYT (FCT-20-17298), aims to bring to the public the results of the research projects in landscape archaeology that the ICAC has been carrying out since 2010 in the Núria Valley (Eastern Pyrenees, Girona), a unique area of high Pyrenean mountains. The project obtained a very good score (92 out of 100) and achieved 5th position out of almost 200 applications in the category of promotion of scientific, technological and innovation culture. It will be developed from July 2022 to June 2023.

The Núria Valley, in the Eastern Pyrenees (Girona), locates above 2,000 m above sea level. It limits to the north with the French-Spanish border on the axial ridge line and extends to the east as far as the Coma de Vaca refuge (1,990 m) and the Núria Valley resort complex to the south. Its landscape is of great heritage and cultural value, with a long history, with traces of human occupation and exploitation dating from the Neolithic to contemporary times.

The possibility of preserving this type of landscape depends on the dissemination and enhancement of its most significant elements, especially its historical and archaeological heritage. The recognition of the cultural value of the landscape is also a tool for land management and contributes to its sustainable development.

The result of ten years of research in the Núria Valley

The ICAC’s Landscape Archaeology Research Group (GIAP) has been carrying out a research project in the Núria Valley area since 2010. The archaeological work has been carried out within the framework of different projects funded by the Spanish Ministry of Science and Innovation (MICINN): Interambar (CGL2009-12676-C02), TerAmAr (HAR2012-39087-C02-02), InterArPa (HAR2015-64636-P) and TransLands (PGC2018-093734-B-I00); as well as the Department of Culture of the Generalitat de Catalunya.

After a decade of interdisciplinary archaeological work, the GIAP (ICAC) has documented a total of 140 structures in the Vall de Núria area, grouped into 28 archaeological sites. Over the course of several campaigns, the group has been involved in 9 of the sites and has excavated 17 of the structures. The projects have involved the intervention of many specialists (archaeology, palynology, archaeozoology, archaeobotany, anthracology, archaeomorphology, topography, etc.), who have applied a great deal of technological innovation to their work.

Results of the ICAC’s research in the Núria Valley have made it possible to accumulate an exhaustive knowledge of the historical evolution of this high mountain landscape in the Pyrenees, the effects that human action and exploitation have had on it, as well as the characterisation of the diachronic evolution of the occupation of the territory, from prehistoric times to the present day.

A comprehensive social transfer programme in the Núria Valley

The main objective of the ArqueoPirenaia project (FCT-20-17298) is the development of new educational resources and knowledge transfer, of a permanent nature, which will allow the public to discover the characteristics of the long human occupation in the Núria Valley and to approach the high mountain archaeology that has been developed in this sector of the Pyrenees for the last decade.

It is worth mentioning that all the educational and informative resources generated will incorporate universal accessibility criteria, making ArqueoPirenaia a pioneering project in the inclusive mediation of cultural heritage. On the other hand, the ArqueoPirenaia project proposal is based on the participation, co-creation, and governance of local agents in all stages of the project.

The ArqueoPirenaia project proposes the creation of a set of four didactic actions that will explain and guarantee the social impact of the results of the project, and which are aimed at the citizens and the territory.

Creation of a website dedicated to the scientific, archaeological, and heritage mediation of the Núria Valley. The website will enable the scientific results of the research carried out by the GIAP (ICAC) over the last ten years to be disseminated among the public and will update existing resources (such as the Archaeo-Tracks) to make them more dynamic and accessible.

Design of a travelling exhibition, linked to the Núria Valley Station Interpretation Centre, to explain the results of the R&D projects developed by the GIAP (ICAC) in this area of the Pyrenees. The exhibition will travel to different spots of the territory and may thus benefit other local cultural facilities, such as the Ethnographic Museum of Ripoll, the Natural Park of the Headwaters of the Ter and Freser rivers, and the civic and cultural centres of the municipalities involved (Queralbs and Ribes de Freser).

A highlighted action of the exhibition is that it will incorporate Navilens codes to facilitate access to the contents for people with sensory or cognitive deficits. Navilens technology is revolutionising accessibility and universal inclusion.

3. Didactic suitcase on high mountain archaeology in the Pyrenees

This action proposes the development of a didactic suitcase, specially designed for tactile manipulation and pedagogical experimentation, from which visitors can discover the main characteristics of high mountain archaeology and the scientific action developed by this discipline in the territory. The didactic suitcase is aimed at families, as well as primary and lower high school students.

4. Onsite and online heritage circuit for visiting and disseminating information about the Núria Valley archaeological sites

A permanent circuit to visit the best-preserved shepherd’s huts and livestock farming areas in the area around the station. It will be a low-difficulty track that will allow the general public to see the characteristic structures of human occupation in the high mountain areas of the Eastern Pyrenees.

Track design includes permanent signposting by means of haptic panels that will also incorporate Navilens codes. The starting point of the track will be located at the current Núria Valley Interpretation Centre. At the same time, the track will be available for online visitors at the ArqueoPirenaia project website and the ICAC Sketchfab space, where 3D models of the shepherd’s huts will be uploaded.

To carry out the ArqueoPirenaia project (FCT-20-17298) the ICAC will have the involvement and collaboration of the Núria Valley Station, the Natural Park of the Headwaters of the Ter and Freser rivers, the Ethnographic Museum of Ripoll, and Queralbs City Council.