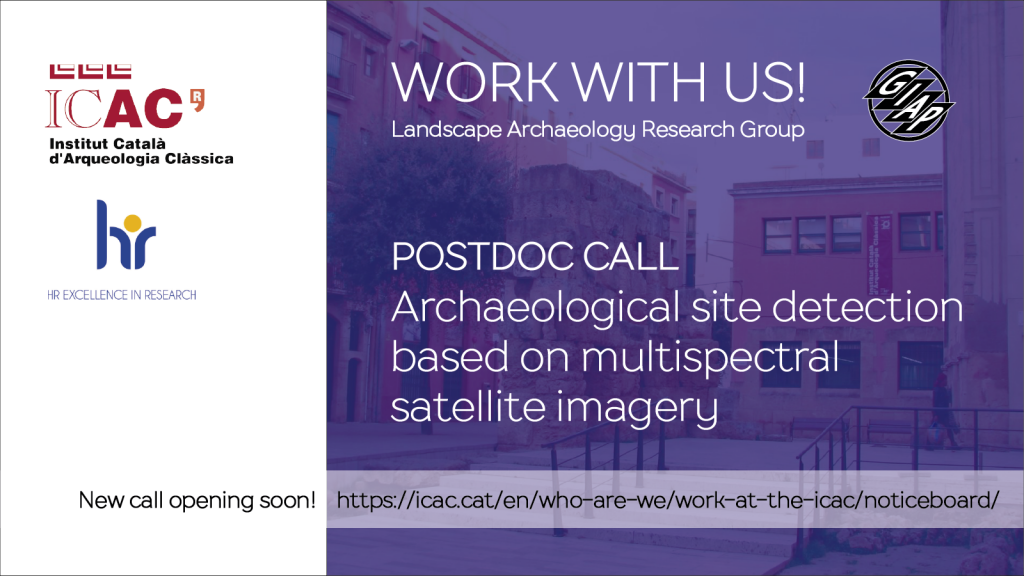 We are searching for excellent candidates with a PhD in Computer Science, Remote Sensing or a similar field interested in conducting research in archaeological sites detection based on applying machine learning techniques on multispectral aerial images. Contract duration: 22 months

The call will open in the forthcoming weeks through Working at the ICAC/Open calls.

The context of this project is an ongoing collaboration between the Catalan Institute of Classical Archaeology (ICAC) at Tarragona and the Computer Vision Center (CVC) at Barcelona. The contract is linked to the project Mapping Archaeological Heritage in South Asia (MAHSA) funded by the Arcadia Fund and developed as a collaboration between the University of Cambridge, The University Pompeu Fabra and the Catalan Institute of Classical Archaeology.

With our previous research we developed an algorithm in JavaScript for Google Earth Engine for the detection of archaeological sites using server combined satellite data (Sentinel 1, SAR, and Sentinel 2, multispectral) and multitemporal (merging 6 years of data for each of the included bands).

The bands included in the composite raster are as follows:

The algorithm used a Random Forest with 300 trees in probability mode and was trained using pixels from the composite image at points where we knew there were archaeological sites (Orengo et al. 2020). In this new project, we are interested in modifying this algorithm to further automate the process and include new bands such as SMTVI (Orengo and Petrie 2017), MSRM (Orengo and Petrie 2018) and thermal data derived from Landsat 7 that we think may be useful to differentiate archaeological sites. Dividing these data into seasonal groups will show significant changes in vegetation cover, humidity, and temperature that may help to distinguish archaeological sites. This will lead to a significant increase in the number of bands of the composite raster. We would make these new band additions in collaboration with the candidate, if applicable.

Additions to the algorithm would be:

The addition of new bands (up to a total of 28-34) would increase computing and prevent the continued use of Google Earth Engine. Therefore, the candidate will need to adapt the algorithm to use their own HPC resources or cloud services. This may involve adapting the algorithm to another language, such as Python. However, this code should connect to the Google Earth Engine platform to obtain the multiband raster, as this is the only platform that can provide this type of information. Earth Engine can be accessed using Python code from a Jupyter Notebook, Colab or similar.

The last step would be to create a front-end that gives access to the algorithm and resources for its training (uploading files with location of sites, selection of new data in successive iterations, etc.). This last step, however, would not fall within the functions of the position. Subcontracting this service will be considered. In any case, the algorithm should be ready to serve as a back-end.