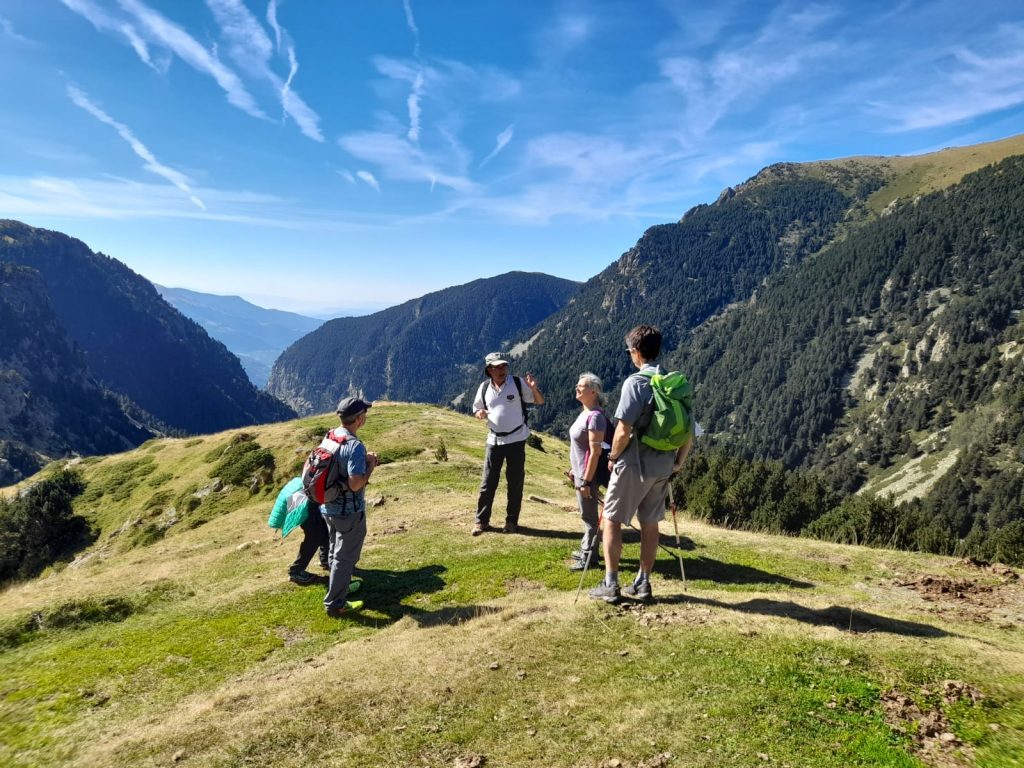 Last Sunday, an incredible weather joined us in the 3rd ‘Archaeoroute’ of the series, where we were able to enjoy a guided visit by Josep Maria Palet highlighting the areas of archaeological interest around la Coma del Clot (Catalonia).

It has been more than 10 years since we started our archaeological work in the natural park of the Ter and Freser river-headwaters. This area, protected since 2015, is located in the eastern Pyrenees and has peaks that reach almost 3,000 m. It is a unique natural space for its natural and cultural heritage, and a great example of the high Pyrenean mountains that descend towards the Mediterranean.

As a result of this work we were able to find evidence that the Pyrenean valleys were shaped by man since prehistory (IV-III millennia BC). Good pastures and easy access to water points have allowed the establishment of livestock communities since the Neolithic, and so far more than 400 archaeological structures related mainly to livestock activity have been documented, such as orris, huts, fences or milking parlors.

The long human occupation of the area was divided in four major phases: the Neolithic period, in which the first livestock communities were established in the Coma de l’Embut and Coma del Freser area; Roman times, when these valleys would be under the area of ​​influence of Ceretan populations and the Roman city of Llívia; the late-ancient and high-medieval times (6th-11th centuries), in which the first archaeological evidence of long-distance transhumant cattle ranching between the flat coastline and the mountains, and finally the modern period (16th-18th centuries), when shows a significant intensification of livestock activities in the Núria and Freser valleys.

This is why in 2019 the ICAC, in collaboration with the Natural Park, launched the ‘Archaeoroutes’, a series of itineraries of archaeological interest to highlight the historical and cultural heritage of the area. This is a good example of how research can contribute to the development of a region. In this case, making the cultural landscape known as an added value to the tourist potential that the area already has.

The design of the routes, result of the heritage proposal of Josep Maria Palet and Pau Olmos, allows you to discover these findings while hiking through the mountains of the Pyrenees that make up the headwaters of the rivers Ter and Freser. A set of six archeological routes introduce us to up to 21 elements of archaeological interest: the  Forat de l’Embut cave, la Coma de Gombrèn, la Dou de Fontalba, la Jaça de les Pedrisses… and many other spaces that we can follow with the itineraries, which are duly marked and signposted.

You can access the ‘Archaeoroutes’ itineraries here (in Catalan & Spanish). Stay tuned for future guided visits!