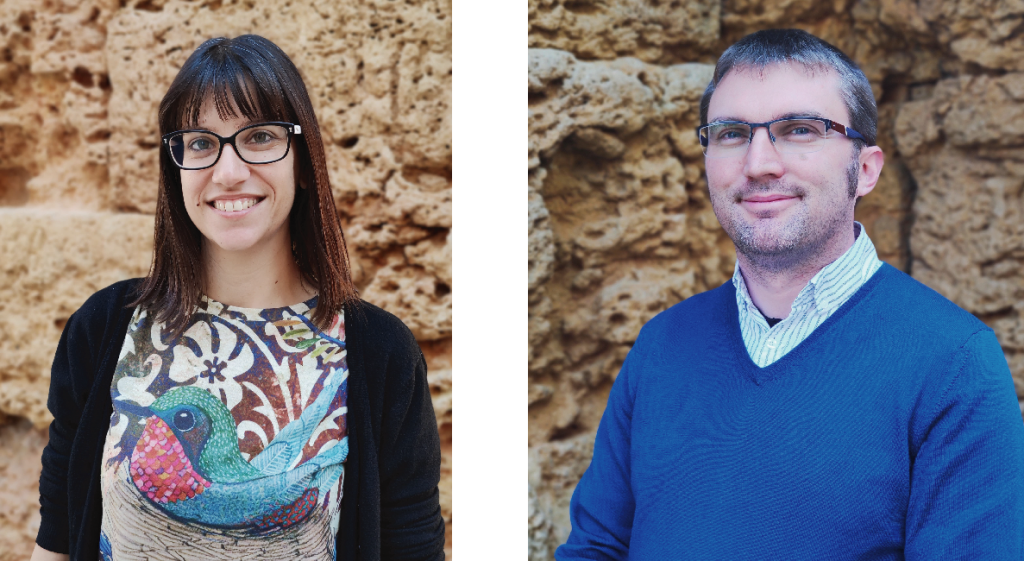 We keep growing! This week, on the 1st of December, Valentina Pescini and Toby C. Wilkinson joined the GIAP research team. Valentina as a Juan de la Cierva postdoctoral researcher and Toby as a Marie Skłodowska Curie Research Fellow. Here is a little bit of information on our new members and their projects on transhumant pastoralism in the Mediterranean and textile industries in the ancient world.

Valentina is a bioarchaeologist, specialised in anthracology and archaeobotany, and her research focuses on the study of agro-sylvo-pastoral practices and their environmental impact through time. She received her Bachelor and Masters degree in Medieval Archaeology (2010) and Archaeobotany (2013) respectively at the University of Siena (Italy). In 2019 she completed her PhD in Historical Geography which was followed by a post-doctoral position at the University of Genoa (Italy). There she has worked in the Laboratory of Environmental Archaeology and History (Cir-LASA) and recently she has started collaborating with GIAP’s InterArPa and TransLands projects. Throughout her career she has collaborated in interdisciplinary research projects with archaeologists, naturalists, historians and geographers.

Valentina’s new Juan de la Cierva project is called ‘Landscape of transhumance: an environmental archaeology research’. Here is a brief summary of what she will be doing during her stay at GIAP in the next two years:

The overall objective of this project is to bring to light the rich environmental and cultural heritage linked to transhumant pastoralism, highlighting how this practice has built and transformed the rural landscape and its living components. Indeed, transhumance has represented one of the main environmental factors and has profoundly transformed the ecology of environmental systems in the Mediterranean area: from plant to animal populations, to the physico-chemical properties and structural characteristics of the soils. The impact of transhumant breeding is identifiable through the study of bio-stratigraphic markers (e.g. macro-micro charcoal, pollen, phytoliths, soil chemical elements, microorganisms etc.) extracted from soils and sediments. Anthracology, pedoanthracology, dendro-anthracology and archaeobotany will be employed in this project to study these issues. Bio-stratigraphic evidence will be cross-checked with other archaeological, historical, ethnographic sources and historical ecology observations. Two study areas have been selected as they represent two of the most important hubs of the transhumance system of the western Mediterranean region: the Eastern Pyrenees (Catalonia – Spain) and the Maritime Alps (Liguria – Italy).  While the archaeological traces of transhumance activity gradually disappear the environmental impact of the abandonment of this ecosystem management practice is increasingly evident: the decrease in biodiversity, increase in hydro-geological and fire risk are just some of the most evident consequences. This research endeavours to add new information that will contribute to new policies for the management of mountain areas that today are highly marginalized.

Below you can find a selection of Valentina’s publications:

V. Pescini (2019) Which Origin for Charcoal in Soils? Case-Studies of Environmental Resources Archaeology (ERA) From the Ligurian Apennines, Seventh to the Twentieth Century. Frontiers in Environmental Science 7-77: 1–15.

Check the following link for more publications by Valentina:

Toby is a landscape archaeologist whose research interests include spatial and computational archaeology, survey and landscape methodology, open-access and web publication, and deep histories of economy in Eurasia. Previously he was a post-doctoral Research Associate at the McDonald Institute for Archaeological Research and Junior Research Fellow at Churchill College, University of Cambridge (2016-2020). Completing his doctorate at the University of Sheffield, he also worked as researcher in Turkey, at the British Institute at Ankara, Koç University’s Research Centre for Anatolian Civilizations (ANAMED) and Istanbul University.

His planned Marie Skłodowska Curie project, YARNSCAPES, aims to develop new methodological tools for the analysis of the impact of textile industries on landscape in the past. As one of the major transformative industries of the ancient world, the harvesting of yarns such as wool, cotton, silk to make textiles had diverse consequences for both social and landscape organisation. For example, the expansion of wool production resulted in the settlement and clearing of previously “marginal” landscapes across south-west Asia and Europe. The project will involve developing relevant ethno-archaeological, remote sensing, spatial and palaeo-environmental methods, as well as work in the on-going survey field project in western Turkey, Project Panormos (https://www.panormos.de/), on the Milesian Peninsula, in which he is a co-director.

With an appreciation of fresh air and forests, as well as pixels and paper, he also hopes to walk in Tarragona’s lovely and evocative Parc Ecohistòric del Pont del Diable often!

Here is a selection of Toby’s publications:

T. C. Wilkinson (2018) Cloth and Currency: On the Ritual-Economics of Eurasian Textile Circulation and the ‘Origins’ of Trade, Fifth to Second millennia BC, in K. Kristiansen, T. Lindkvist, J. Myrdal (eds.) Trade and Civilization: Economic Networks and Cultural Ties, from Prehistory to the Modern Era. Cambridge: Cambridge University Press. doi:10.1017/9781108340946.003

Check the following links for more information on Toby’s work: