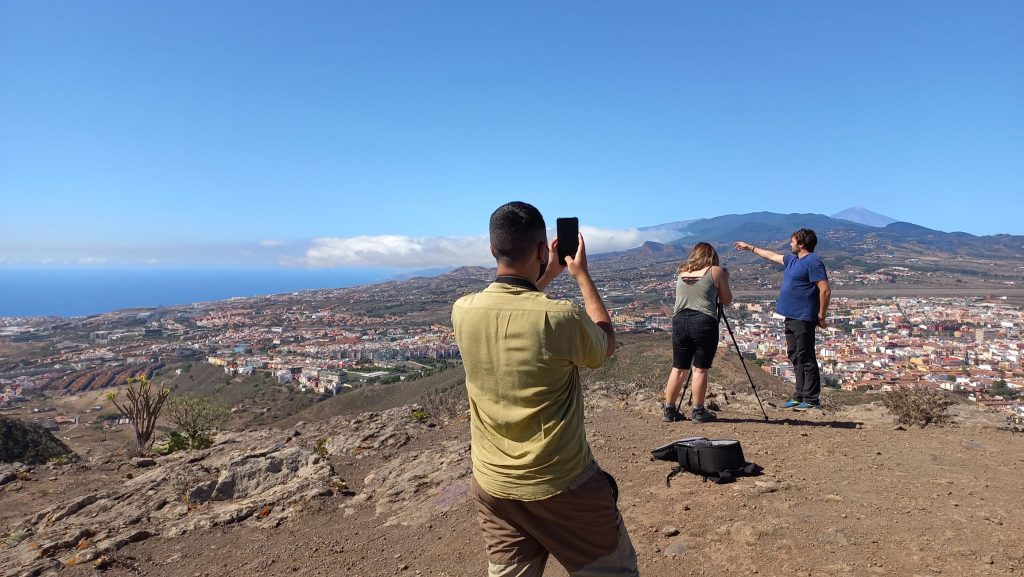 This is a post about fire, pirates and… landscape archaeology! How does this sound?

Our GIAP member Francesc C. Conesa and his colleague Jared Carballo (ULL) talk about VIGILANT. This new project aims to shed new light on the historical network of signalling fire beacons in the island of Tenerife. The project has been recently funded by the Dirección General de Patrimonio Cultural, Gobierno de Canarias.

Francesc is currently conducting a research stay at the Archaeological Micromorphology and Biomarkers Laboratory (AMBI Lab) at the University of La Laguna (ULL) in Tenerife. Here, Francesc contributes to the lab by integrating archaeological micro-observations (mainly from soil micromorphology and biomolecular analysis) with more regional patterns and narratives of past land use in a range of aboriginal and early colonial contexts.

But how did this collaboration end up into a pirate’s tale?

“During a field trip a few months ago, we documented the remains of a circular stone structure atop a prominent hill near La Laguna, the historical capital of the island and now a UNESCO World Heritage urban centre”, says Francesc. Local neighbours and hikers knew about the structure, but it was virtually absent from any official heritage or site database. A preliminary search into local archives, aerial photographs and topographic maps resulted in more locations that could have similar structures.

Francesc continues: “all the data we gathered was pointing towards a series of beacon stations that used fire and smoke signals to alert the harbour and inland inhabitants of potential enemy ships or war fleets sailing nearby. The beacon network was set in place during the early colonial period in the 16th century and lasted until the arrival of modern cable communications through the 19th century. We had all the pieces to take VIGILANT to a fully-funded research project!”.

Jared Carballo (University of La Laguna) co-directs the project. He adds: “This is a fresh case study of early colonial archaeology in island contexts. Tenerife has abundant and well-preserved archives, and we are now collecting daily entries of Council meetings that inform us about the political context of the beacons and the daily life of the watchmen: their names, the salary they had -if any-, and, equally important, we can extract the names of mountains and hills that were used as beacon stations at a regular basis”.

Francesc and Jared are working together with a team of AMBI Lab and ULL members, together with our very own GIAP drone pilot Paloma Aliende. Xavi Rubio-Campillo, director of the DIDPATRI research group, University of Barcelona, will also use HisTeNa, a new Python-based tool to quickly annotate, query and visualise information from large text databases.

“For centuries, the beacon signalling network was the island’s first line of defence against pirates, privateers or Crown enemies. People who worked as watchmen were shepherds and farmers, and they kept their agro-pastoral activities while on duty. As a result, many beacon locations are associated with impressive ethnographic remains such as huts and terraces. Therefore, we are studying the early configuration of Tenerife’s cultural landscapes in colonial times”, concludes Jared.

VIGILANT starts its initial phase. The team will focus on the beacon network in the Anaga mountain range and the hills around Santa Cruz and La Laguna. Remote geospatial analysis will be combined with fieldwork and drone-based mapping during this autumn. A first inventory of beacon locations and their associated remains will be used to plan further excavations and, eventually, create a series of new cultural hiking routes.

Follow us for more results to come… and yo ho, yo ho, a pirate’s life for everyone!